I finally got my camera back from mi Mama, so that means I have my pictures from the Salt Lake Half two weeks ago. Yippeeeee!
The first one she took as I was rounding the corner for the home stretch. I tend to get in the zone, so I was so happy that I was able to see them! (I was also VERY happy that the home stretch was downhill. THANK YOU race directors!) As a side note: See that guy in the left hand side of the screen? I passed him before the finish line... as well as the guy that was in front of him :). Passing boys=great joy. 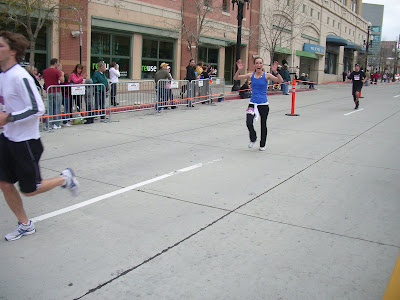 And in case you couldn't see how excited I was, here is a closer look- 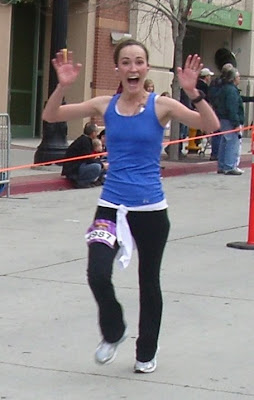 Here I am with my biggest fans. The top picture is my dear friend Kalie Chamberlain, me, Will and Annie (my babies). The bottom picture is with my Mom. I have the best fans in the world. 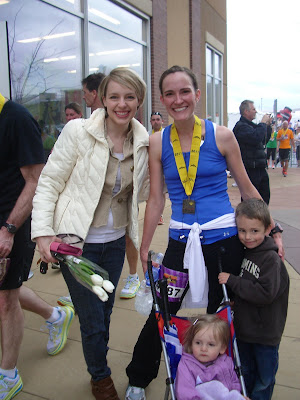 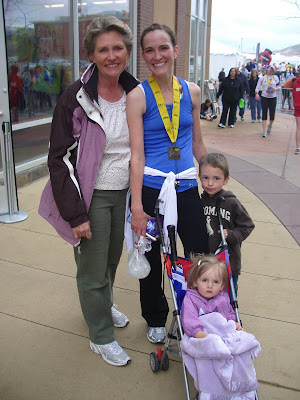 Don't you think I look like my Mommy???
My husband couldn't come because of school, but he promised to be there on September 17th during my marathon. Not only did he promise that he would come, but he promised he would support me along the course! Bonus! I'm going to need all the extra bursts of energy I can get. I still don't know about 26.2 miles. Promise I won't die?
Posted by Amylee at 7:59 PM 3 comments:

Hello, My Name Is Guardsman

For those of you that don't have any idea what "Guardsman" is, it is the road that goes from the Heber Valley up into Brighton, or Park City. It is also the final legs of runners 9 and 10 in the Wasatch Back Ragnar Relay. Leg 34 (the one I will be running) is 4 miles up Guardsman Pass. It's brutal.

How do I know this?

Well, besides the fact that I've driven it and run parts of it a number of times, I also have a husband that works in the surveyor's office in Wasatch County. He has had the opportunity to take shots on Guardsman's Pass and he has told me about how it is an 18% grade. That is not a typo. One-Eight-Percent. There are parts of this road that are so steep that they had to be paved because you can't have a gravel road that grade because it is unsafe. Unsafe, people!

And I will be running this most likely in the heat of the afternoon, after I have been up all night, and having previously run 2 other legs.

Ah, the beauty of a Ragnar Relay.

Without further adieu, here it is.

Mindy and Holly are two of my running buddies that live by me- they are crazy enough to run this "for fun". Mindy is runner #9 on my Wasatch Back team and will be tackling the first part of Guardsman in the race. Holly is on another team and is training to run her way up Old Snow Basin Road (which is also a steep bugger).

It was gorgeous yesterday! Guardsman's Pass is right in the middle of these two mountains heading up towards the snowy peak in the middle.

So it begins- the sign at the beginning of the pass.

Pictures don't do it justice for how steep it is. Running up the thing you know it is steep because your calves and quads never stop burning, but it's when you are running down that you realize how crazy it is.

In case you didn't realize it during the first mile and a quarter...

The only thing that is worse than running Guardsman, is running a snow covered Guardsman.

"You've got to be kidding me." I made it up 1.8 miles from the gate. Only 2.2 more miles and I will have run the distance of my last leg! It's going to be nutso.

This was the view headed down. Can you believe I live in this valley? It's going to be even more gorgeous in a few weeks when the leaves actually start coming on the trees. It's almost spriiiing! I stopped a lot and walked a few times when I ran it this time. My right knee has been bothering me a little bit so I didn't want to push myself too hard. The good news is that it hasn't bothered me at all today!

I have a tough run planned for today: 1.75 miles up Guardsman's pass.
"1.75 miles?" you say.
"You are a huge baby," you say.
Well, my friends, I will introduce you to Guardsman- complete with pictures- tomorrow.
Suffice it to say that I am nervous about it already. I will be worried about it until 5PM when I hop in my car to drive over there.
I properly fueled myself with leftover cheesecake for breakfast, so I will most certainly rock it.
Posted by Amylee at 8:33 AM No comments:

This was my time for the Salt Lake Half Marathon this last weekend! I'm still squealing about it inside. I had no idea that I was capable of a time like this for such a long run! My training runs were consistently at an 8:45-8:25 pace. I kept looking down at my watch and shaking my head in disbelief. I'm certain that the volunteers and police officers all thought I was nuts because I couldn't wipe this goofy smile off my face.

This race was awesome because:

2- I achieved my goal of not walking during the half! I only walked to drink at 3 water stops. This wasn't without trial- Mile 11-12 up State Street was a beast and I wanted to stop desperately; thanks to P!nk, ADELE, and Natasha Beddingfield on the iPod, I was able to push through. I just kept thinking "You can't walk during this song! This is a good song! Make it to the next one." Luckily the good songs just kept coming.

3- Remember how worried I was about the port-a-potty situation? There was no need!

4- I didn't pee my pants. This was a huge accomplishment. If you are a woman and have had a baby (or two), then this is a pretty big deal.

I had some awesome cheerleaders. My Mom came and brought my kids, and then my dear friend Kalie brought me some white tulips (my fave!) to the finish line. I saw them as I was rounding my last corner and it gave me the final boost I needed to finish strong (and pass two men on the way). My Mom had my camera and took pictures, unfortunately she took my camera home with her! I'll post them when I get it back next week. (Although, I don't know why- pictures of me running tend to be... scary. To say the least. That's a topic for another time).

It was a great race! BIG HUG AND THANK YOU TO ERIN PULLEY for letting me pretend I was her for the morning. Now I just need to cross my fingers that this knee pain I'm having is temporary. I guess I'll find out tonight on my 3 mile recovery run.
Posted by Amylee at 2:07 PM 8 comments:

Last night wasn't even the night before the race, and I still couldn't sleep! I wonder if I will ever reach the point in my running "career" that I won't get nervous for races. My friends will tell you that I get this really serious look on my face for the couple of hours before the race starts. I mostly just look like I'm ticked off, but I swear it's just because I'm trying not to puke.
Do you get the jitters? How can I get rid of these and ensure myself a good night's rest tonight?
Posted by Amylee at 7:47 AM No comments:

Saturday I will be participating in an impromptu race... the Salt Lake Half Marathon! One of my closest friends has been training for this religiously for months, but she fell victim to the devil known as "Runner's Knee." I'm excited to pretend like I am her for a couple of hours to be able to run this race!
I only have one simple goal: RUN WITHOUT STOPPING.
I do not want to take any walk breaks for any reason besides sucking down water. My last half marathon I ran in 1:50, and I had waaaaayyyy too many walking breaks. I'm hoping by achieving this one goal that I will be able to PR. We'll see! I haven't had much time to mentally prepare for this so it's kind of different for me. It's been nice! Plus, check out the downhill on this course- I should be able to fly.

However lately I've been having troubles..... Bathroom troubles. Why do they only have 2 bathroom stops on the half marathon course, and in the full marathon they have 13?! Why?! Ya'll should start praying for me because I'm going to need all the help I can get!
Goodness. I can't believe I just wrote that on the blog. Well, honesty is the best policy- or so they say.
If you're around SLC you should stop by the Gateway and cheer me in- unless you are creepy. I don't think I'll have a cheering section this race. I'm crossing my fingers that the hubby and babies will be there for this one.

Wouldn't it be incredible to break the tape for a race? Awesome.
Posted by Amylee at 5:58 PM 1 comment:

I have a little over 5 months before the Top of Utah Marathon that I will be running in September. I think about it every day. It still scares the CRAP out of me. However, I can't wait to do it. To feel it.

Sometimes I don't realize that I'm doing something great until I can look back at it. It's a problem.
Today I was downloading my watch onto the Garmin site and I was looking at my statistics for the month of March. I'm at the beginning of my training for the Wasatch Back (the mother of all Ragnar Relays!) and it's just starting to get to the nitty gritty in April and May. So, I was surprised when I saw this:
It made me think of dear old Dr. Suess's book, Oh, the Places You'll Go! It's surprising where a month of training can take you. Heck, in elevation this month I climbed an entire mountain. That's pretty awesome.
Posted by Amylee at 9:18 AM 2 comments: 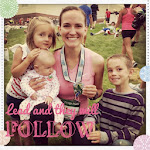